Twister rated as EF-5
In addition to the devastation in Greensburg, parts of Oklahoma were reeling from twisters that hit Saturday night. One person died from that storm in the northern town of Ottawa, Kansas.

The Oklahoma town of Sweetwater, about 225 miles south of Greensburg, was hit hard by a twister that severely damaged a high school and other buildings Saturday. (Watch a 360-degree look at the devastation that twisters left behind in Greensburg )

The damage path at its widest point was about 1.7 miles (2.7 kilometers), and it tracked for 22 miles (35 kilometers). (Watch an aerial view of the devastation )

Two more victims have been found in a small town devastated by a huge tornado in the central US state of Kansas.
The discovery of one body under rubble and another in a nearby lake takes the death toll to at least 10, officials in the town of Greensburg said.

Rescue teams also found a survivor on Sunday and are continuing to search for anyone trapped since Friday's storm.

Many residents have been allowed back for the first time to assess damage to their homes and retrieve possessions.

They have been told they can only stay until dusk, when they must leave for the shelters where most are staying in nearby towns.

The authorities have been checking residents' names in an attempt to find out whether more people may be missing.

An estimated 95% of homes and businesses in Greensburg, a town of about 1,500 people, have been damaged or destroyed.

A further two people died elsewhere in the state in the course of a weekend of violent storms.

"That's why we are continuing the search and recovery," he said. "We will continue this through today and tomorrow and hopefully we will find more folks alive."


The search efforts were delayed on Monday by a leak of anhydrous ammonia, used as fertiliser by farmers, which meant rescue workers had to evacuate part of the town.

R David Paulison, director of the Federal Emergency Management Agency (Fema), is expected to tour the area on Monday.

Fema is working to set up trailers to house families left homeless when winds of up to 205mph (330km/h) tore buildings from their foundations in Greensburg.

She said the state's response would be negatively affected because emergency equipment such as trucks, tents and trailers had been sent to Iraq.

"Not having the National Guard equipment, which used to be positioned in various parts of the state, to bring in immediately is really going to handicap this effort to rebuild," she said, the Associated Press news agency reports.

Heavy equipment will be needed to move the large amounts of debris left by the tornado, which was classified by the National Weather Service as an F-5, the most powerful category.

The tornado was described as a "wedge", a particularly wide formation said to be - in this instance - more than one mile in diameter.

There were confirmed reports of several more tornadoes in the state over the weekend.

A man died in Ottawa County, 250 miles northeast of Greensburg, state officials said, and 11 people were injured in the town of Osborne when a tornado hit two restaurants.

Several homes were damaged and one person was injured by a tornado in western Oklahoma.

Heavy rain continued to sweep the central US on Monday, leading to flooding in areas including Topeka, capital of Kansas, and south-west Iowa.

National Guard soldiers have been sent to the area to provide security and to start clearing the debris left by the storm.

One of the few buildings still standing is the courthouse. The city hall, schools, businesses as well as homes were destroyed.

A "career" storm… from a radar operator standpoint. It’s 3:00am, I’m still up, but should be going to bed, but I’m just too darned keyed up. Where do I begin? The storm of the day erupted at the southernmost end of a cluster of pseudo-organized right and left members to its immediate north. But the far southern storm that erupted out of nowhere just had that shape. Not 2 minutes after I issued SVR again for eastern Clark Co for that storm I issued TOR… I didn’t have to wait for strong 0.5 convergence/couplet, whatever. It took it awhile to get going… about Protection or so… but when it did… it went on to produce a fantastic velocity signature 0.5/0.9 slices north of Protection. The couplet was tracking more northeast… missing Coldwater to the northwest and approaching highway 183 about 7 SSW of Greensburg. Velocity rotational couplets were topping out at around 150 knots total shear over about a 1-2 mile radius. I was just thanking the lord that it appeared to be taking a course to miss Greensburg to the southeast. The next couple slices, though, frightened me. The damn couplet was bending to the left…and the next scan was even more to the left… and I didn’t even really give it thought… the "…tornado emergency for Greensburg…" in my next SVS… it was like instinct - just did it. Those few minutes after watching one of the most incredible velocity couplets go directly over one of your good sized communities in your CWA… I was just too anxious. Then the message was sent out… a plea from Greensburg dispatch… "Ford County communications this is Greensburg… we just took a direct hit…".. that came no more than about 3 or 4 minutes after the couplet passed over. I then immediately sent out another SVS indicating that Greensburg likely took a direct hit.

Thereafter… the steady-state cycling of tornado cyclone…tornado…left turn…. next cycle… tornado, left (north) turn…. next cycle… it was routine… the most steady-state cyclic significant tornadic supercell I had ever seen, let alone work the warnings on radar. I don’t think that there was 1 minute from the time of the first tornado near Protection….to the time it exited our CWA and headed into the Ellinwood area…that there wasn’t a significant tornado tearing $h1t up….over that 100 mile stretch. 100 miles of steady-state tornado production… I’m not sure how many members there were in this wedge-family. Just to see hours on end of velocity signatures like this is something I’ll never forget. Inbounds of 120 knots and higher at times… inbounds only! Several times throughout the life! I think the highest we saw was about 150 knots that actually looked like legit data… as in properly aliased.

Greensburg is pretty much gone. Especially the western 1/2 of town from what I can surmise from the media reports and interviews. How many of you are familiar with the Largest Hand-dug Well? There’s a tall tower that stands proud above that well. No more. Completely gone, at least from one of the accounts I heard. The Big Well is located in the heart of town… and the reports are that downtown and the western portions of town suffered the worst of the damage. One account I heard of was that when one of the residents looked out their window… they couldn’t see the tower anymore. They didn’t know where it went.

One of my favorite storm photos of the year so far included Greensburg in the shot. This was taken about 5 miles west of Greensburg back on March 29th.

So it’s 3am, and at the surface here in DDC it is 72/65F with the short-fuse composite showing 3000 J/kg of CAPE… at 08z! Winds are howling out of the south southeast… it’s going to be another long day today… 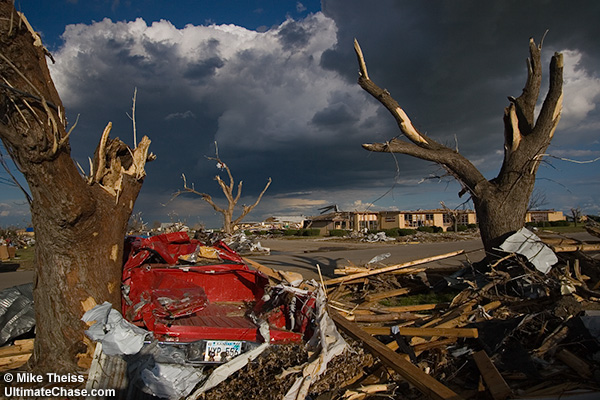 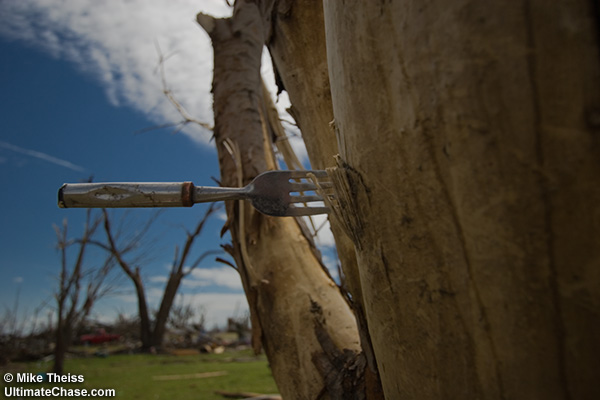 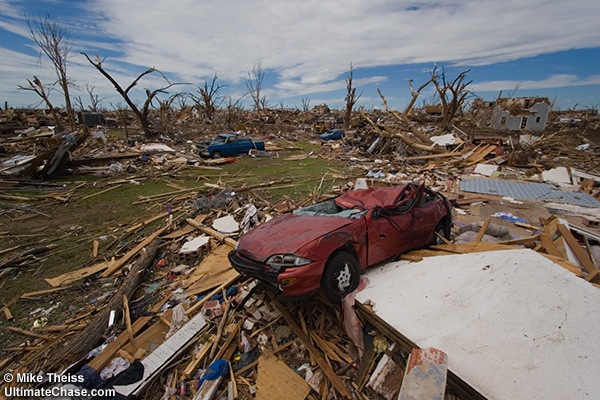 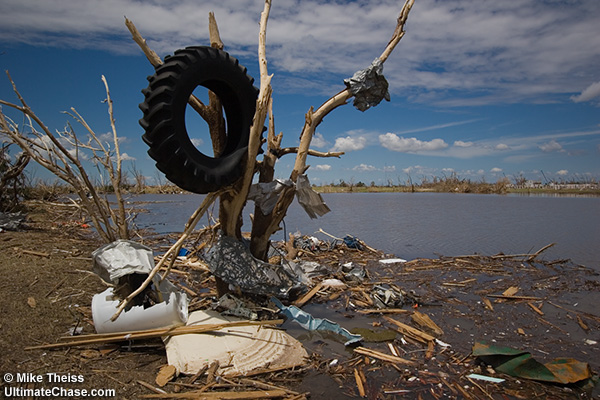 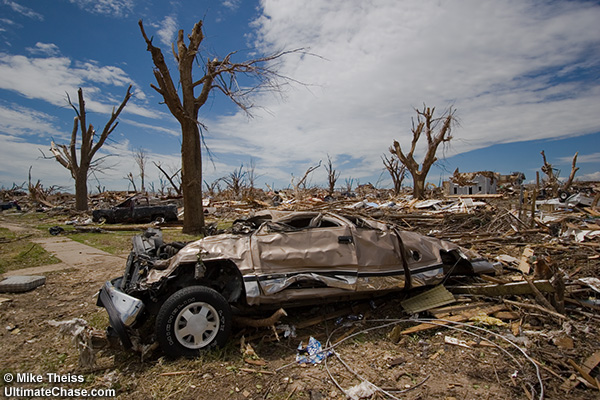 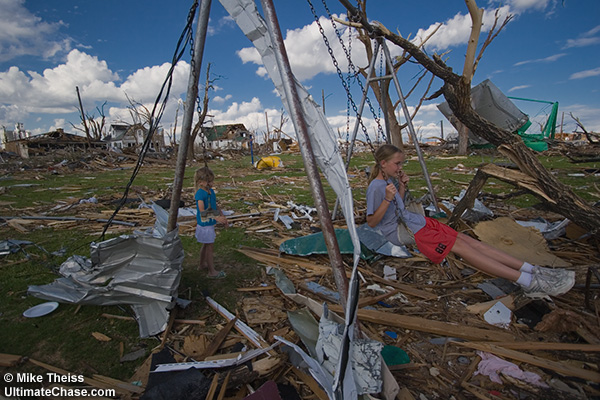 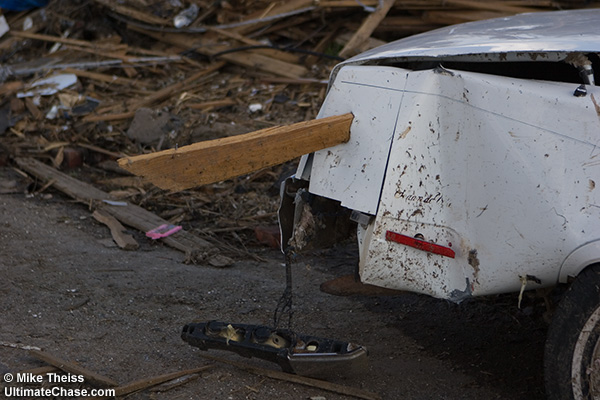 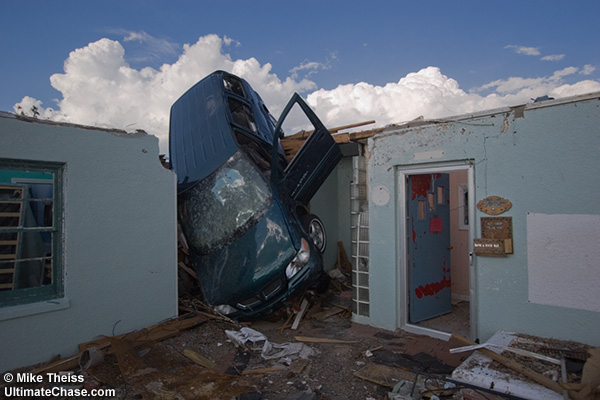 Título alterado!
Mostrar assinatura
The first fall of snow is not only an event, it is a magical event. You go to bed in one kind of a world and wake up in another quite different, and if this is not enchantment then where is it to be found? - J B Priestley