Update: The U.S. Coast Guard has suspended its search overnight for the missing MV El Faro with 33 crewmembers onboard near the Bahamas after the search on Friday turned up empty.

So far, the crews have been unable to locate and reestablish communications with the vessel or its crew.

The search was temporarily suspended at sundown and will continue at first light Saturday morning, the Coast Guard said.

Original: The U.S. Coast Guard has launched a search for a U.S.-flagged containership with 33 crewmembers aboard reported to be caught in Hurricane Joaquin, near Crooked Island, Bahamas.

The Coast Guard reported Friday that at approximately 7:30 a.m. Thursday, watchstanders at the Coast Guard Atlantic Area command center in Portsmouth, Virginia, received an Inmarsat satellite notification stating the 735-foot cargo ship El Faro was beset by Hurricane Joaquin while en route to San Juan, Puerto Rico, from Jacksonville, Florida. The notification said that the ship had lost propulsion and had a 15-degree list.

The El Faro crew reported the ship had previously taken on water, but that all flooding had been contained, the Coast Guard said.

Two Air Force C-130 Hurricane Hunter aircrews have also attempted to locate inside the hurricane and reestablish communications with the El Faro but so far any attempts have been unsuccessful. Coast Guard crews remain on scene and are continuing search efforts Friday by both air and sea.

El Faro is part of TOTE Maritime’s fleet serving in the Puerto Rican trade. The crew is comprised of 28 U.S. citizens and five Polish nationals, according to the Coast Guard. 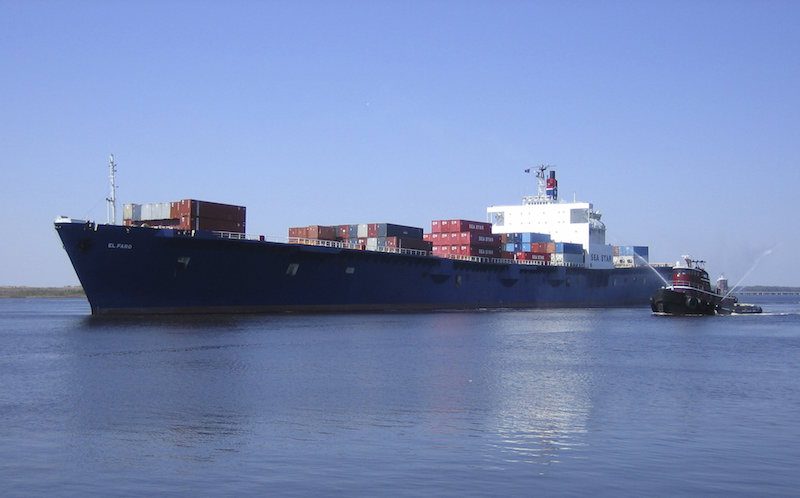 The El Faro is shown in this undated handout photo provided by Tote Maritime in Jacksonville, Florida, October 2, 2015. Reuters/Tote Maritime


Hurricane Joaquin grew to a powerful Category 4 storm on Thursday, battering the Bahamas with torrential rain, strong winds and storm surges. On late Thursday, Joaquin was centered about 75 miles (120 km) south of San Salvador, Bahamas with maximum sustained winds of 130 miles per hour (210 kph), the National Hurricane Center said in its advisory late on Thursday.

Tim Nolan, President of TOTE Maritime Puerto Rico issued the following statement regarding the situation with the El Faro:

“On September 29, the El Faro, one of TOTE Maritime Puerto Rico’s two ships departed Jacksonville en-route to San Juan Puerto Rico. At the time of the El Faro’s departure, the vessel’s officers and crew were monitoring what was then Tropical Storm Joaquin. As of 720am EST on Thursday October 1, TOTE Maritime Puerto Rico lost all communication with the El Faro. The US Coast Guard was immediately notified and since then we have been unable to reestablish communication. There are a number of possible reasons for the loss of communications among them the increasing severity of Hurricane Joaquin.

TOTE Maritime Puerto Rico’s primary concern is for the safety and well-being of the 33 individuals on board. We are working to ensure clear and frequent communications with their families and loved ones as we learn more.

We have reached out to the families of those impacted and have established open lines of communication to provide them with timely updates. Our thoughts and prayers are with the individuals and their families.

TOTE Maritime Puerto Rico is working closely with the US Coast Guard and all available resources to establish communication by whatever means possible.”

Location of Hurricane Joaquin on Thursday: 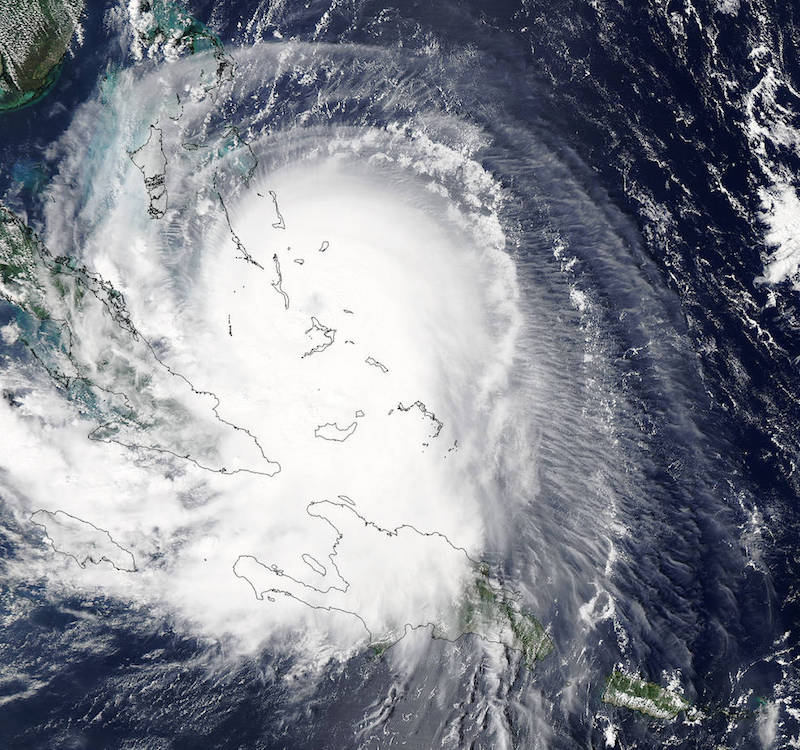 
The El Faro has been a part of Sea Star Line’s fleet serving the Jones Act trade route between the U.S. and Puerto Rico and the Caribbean. Sea Star Line was an operating company within TOTE, Inc., but it was recently re-organized along with Totem Ocean Trailer Express, serving the Alaska market, under the TOTE Maritime brand.

The El Faro was originally built in 1975 and underwent a major overhaul in 2006. The ship was known as the Northern Lights.

...CORE OF INTENSE HURRICANE JOAQUIN BEGINS TO MOVE AWAY FROM
THE CENTRAL BAHAMAS...
...HURRICANE CONDITIONS WILL CONTINUE FOR SEVERAL MORE HOURS... 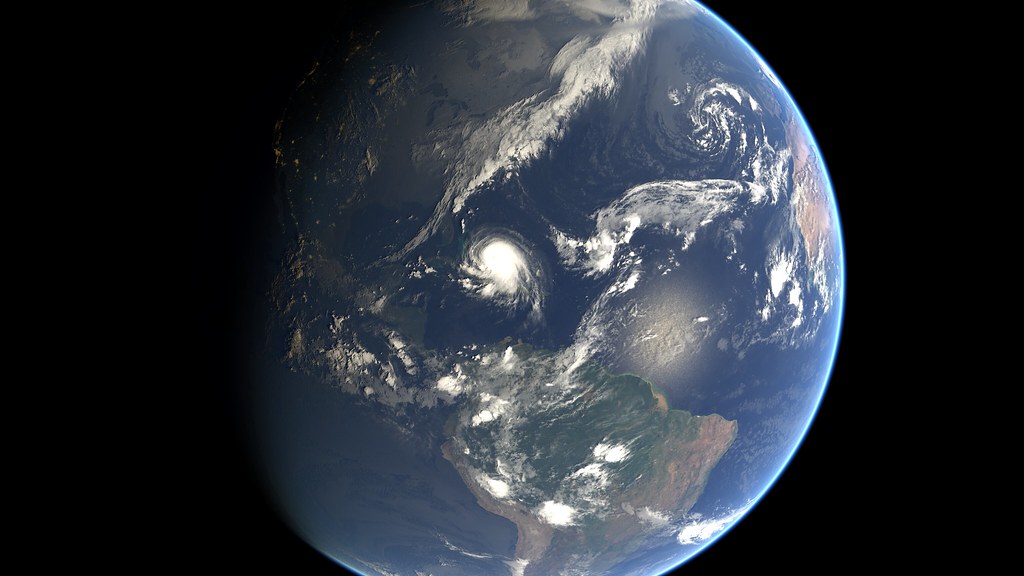 Devastation across the Bahamas... home wiped completely off its foundation in Rum Cay, Bahamas.. ou no caso do Joaquin:

The satellite presentation has improved during the past 12 hours.
A distinct eye is clearly observed in conventional imagery, and it
is surrounded by very deep convection. A blend of subjective and
objective Dvorak estimates of 6.0 and 6.5 T-numbers, and a peak
flight-level wind of 128 kt at 700 mb reported by a reconnaissance
aircraft yields an initial intensity of 115 kt. The central
pressure has dropped to 936 mb in the last reconnaissance fix.
Despite the small increase in the initial intensity, the NHC
forecast, which is very close to the intensity model consensus,
calls for gradual weakening due to increasing shear and cooler
waters. By the end of the forecast period, Joaquin is expected to
have lost tropical characteristics.

Reconnaissance and satellite fixes indicate that Joaquin is moving
toward the northeast or 050 degrees at an average speed of 12 kt.
The hurricane is currently embedded within the flow between a deep
eastward-moving trough over the southeastern United States and a
subtropical ridge over the western Atlantic. As the trough over the
United States swings eastward, the hurricane will likely turn
more to the north-northeast with some increase in forward speed
during the next 12 to 24 hours. Then, as the trough weakens, the
hurricane could slow down while moving west of Bermuda during late
Sunday. After that time, Joaquin is expected to become fully
embedded within the mid-latitude westerlies and accelerate eastward
toward the northeast Atlantic. The NHC forecast is very similar to
the previous one, on top of the multi-model consensus, and in the
middle of the guidance envelope.

Although the confidence in the track forecast has increased due to
the good agreement among models, a small deviation to the east of
the forecast track would bring the core of the hurricane with
stronger winds closer to Bermuda.

This special advisory is to adjust the initial and forecast
intensity through 36 hours. An Air Force Hurricane Hunter plane
just penetrated the eye of Joaquin and measured 144 kt at 700 mb and
SFMR winds of around 135 kt. No change in the forecast track is
necessary.

An Air Force Hurricane Hunter plane just indicated that the maximum
sustained winds have increased to near 155 mph (250 km/h) with
higher gusts. Joaquin is a strong category 4 hurricane on the
Saffir-Simpson Hurricane Wind Scale. A gradual weakening is
still anticipated during the next couple of days.

The minimum central pressure recently reported by a reconnaissance
plane was 933 mb (27.55 inches).