You are using an out of date browser. It may not display this or other websites correctly.
You should upgrade or use an alternative browser.
H 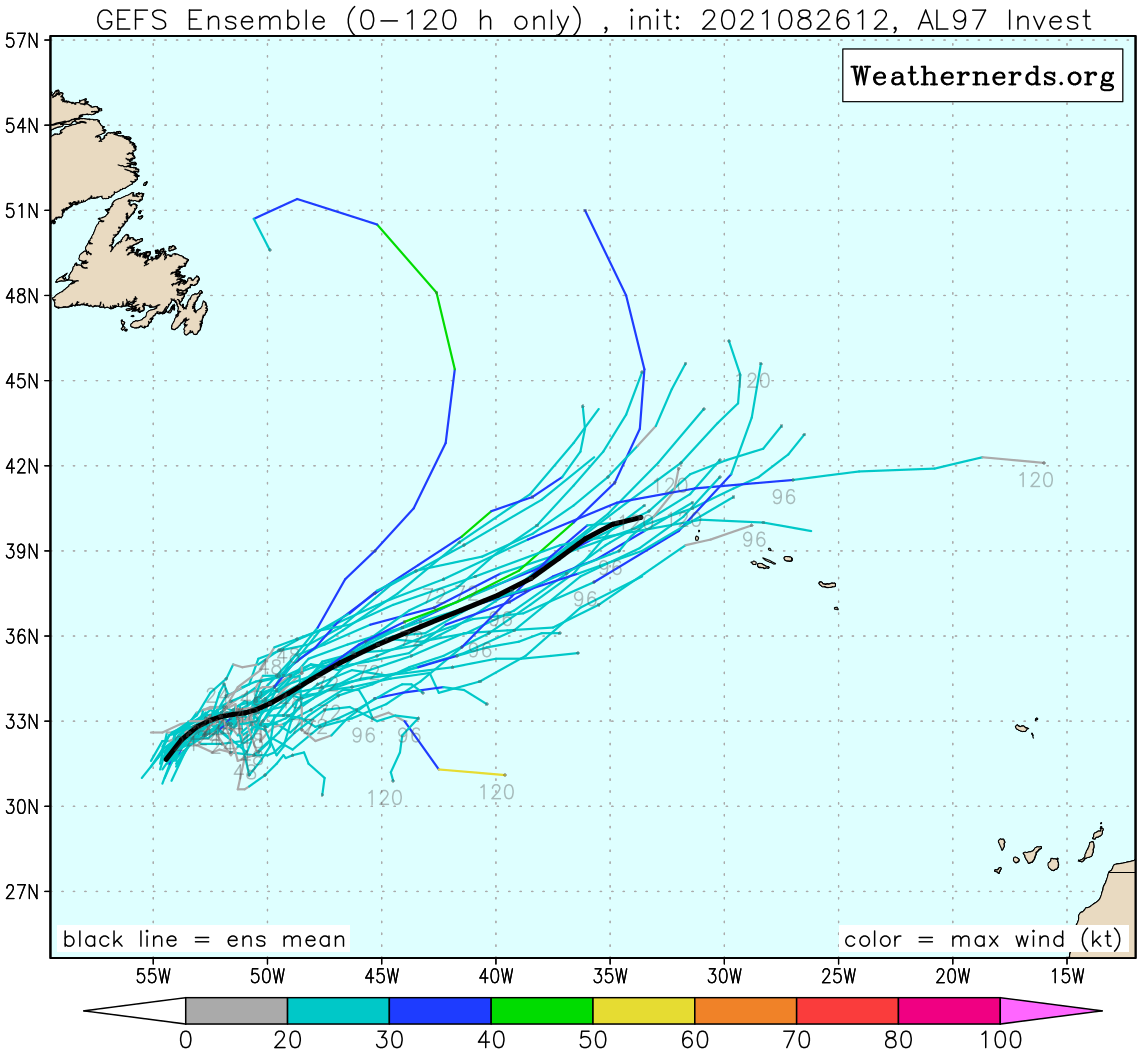 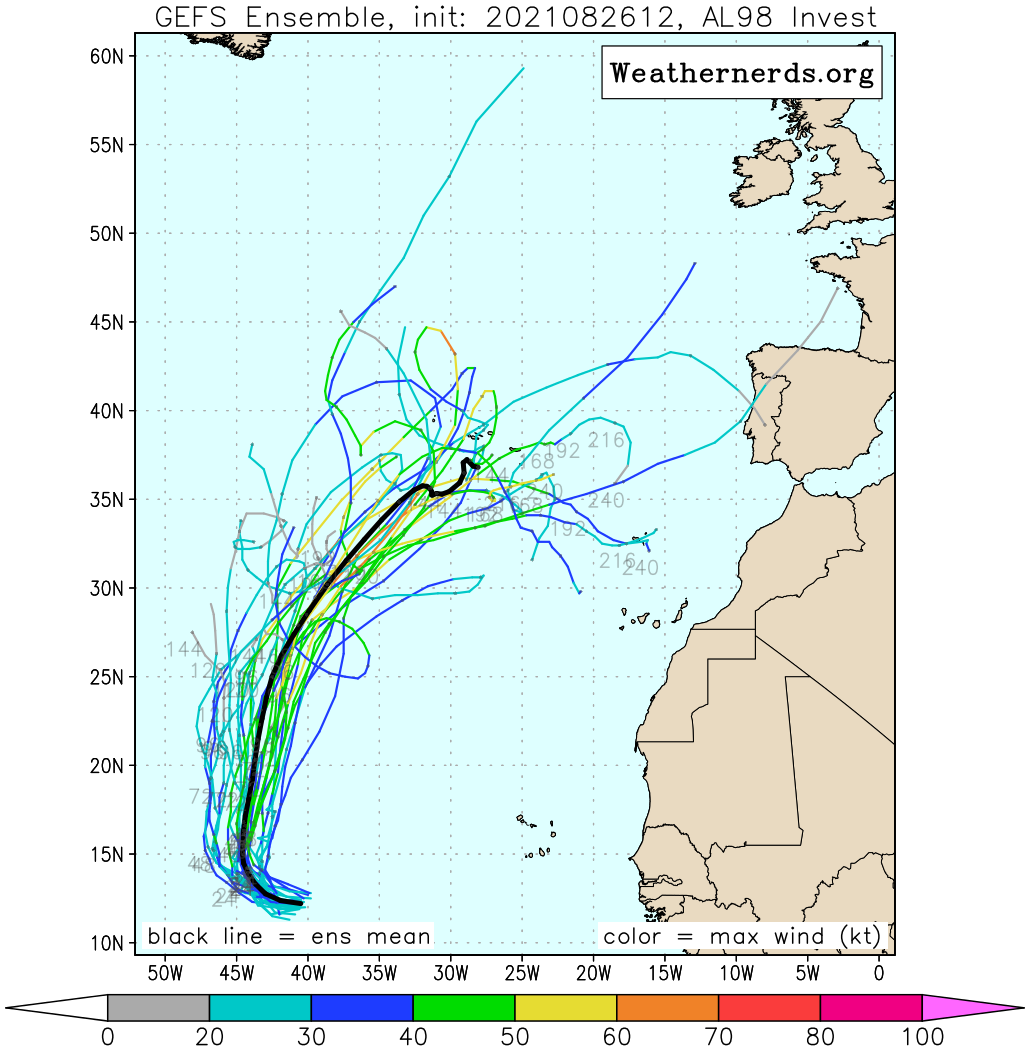 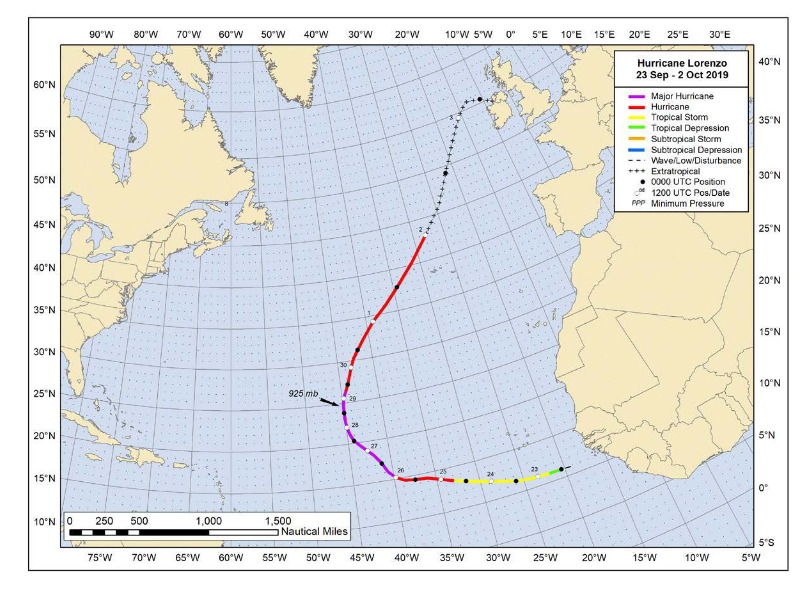 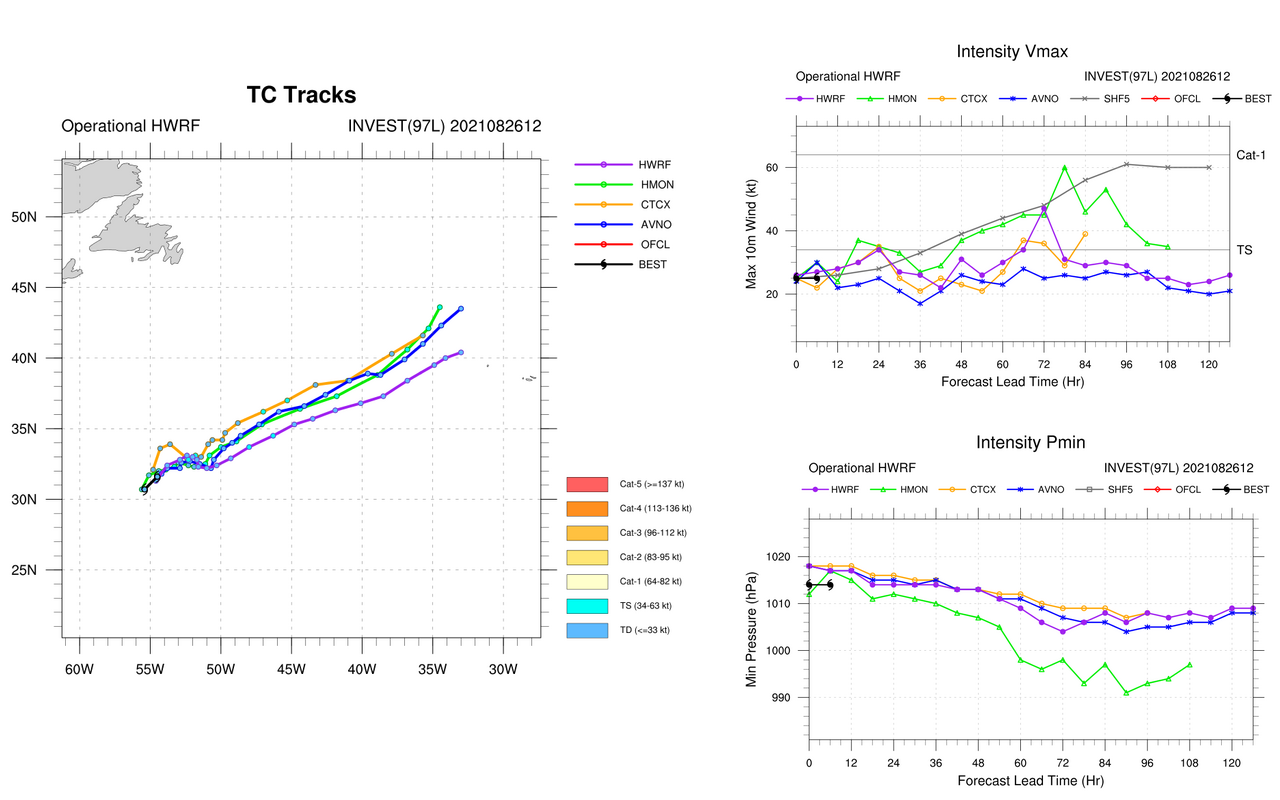 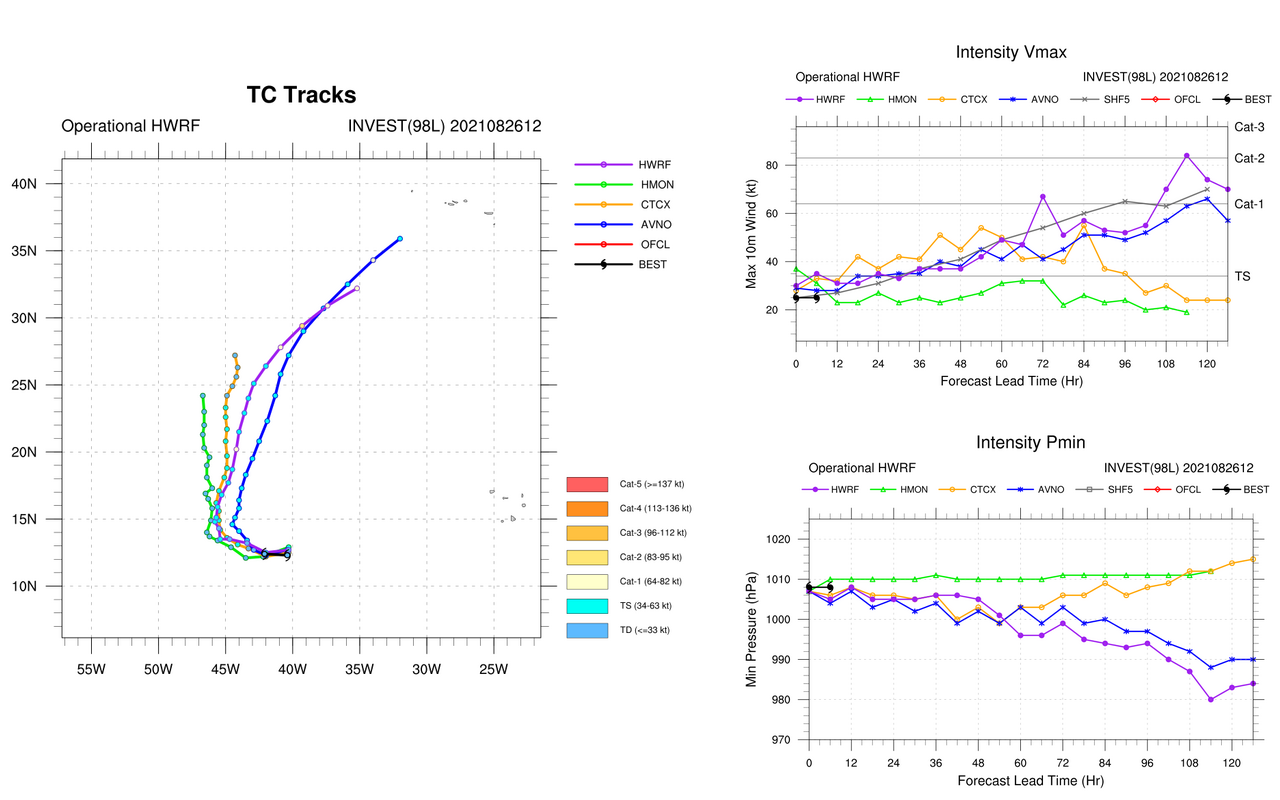 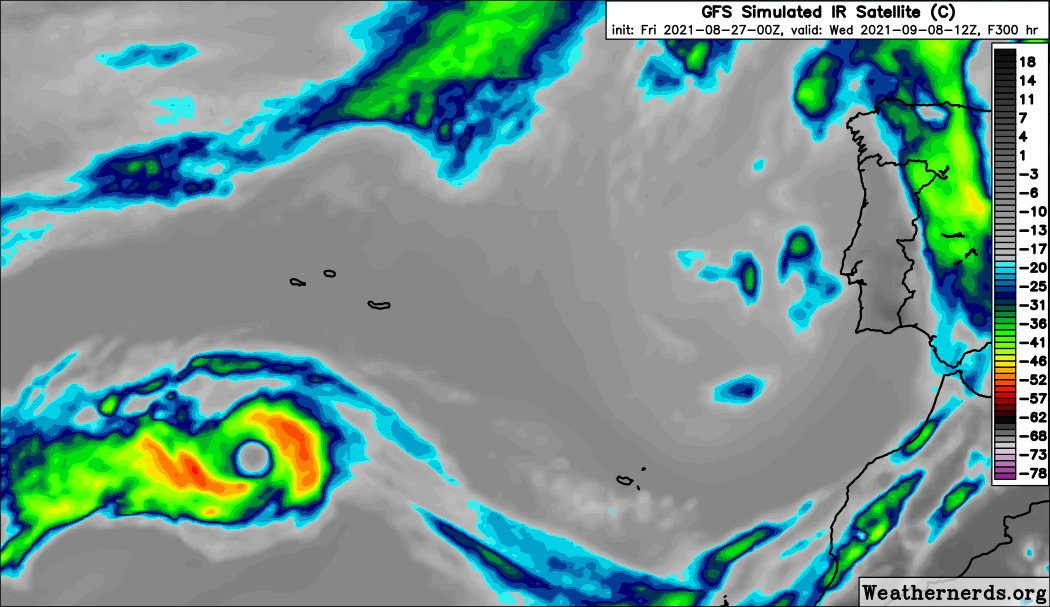 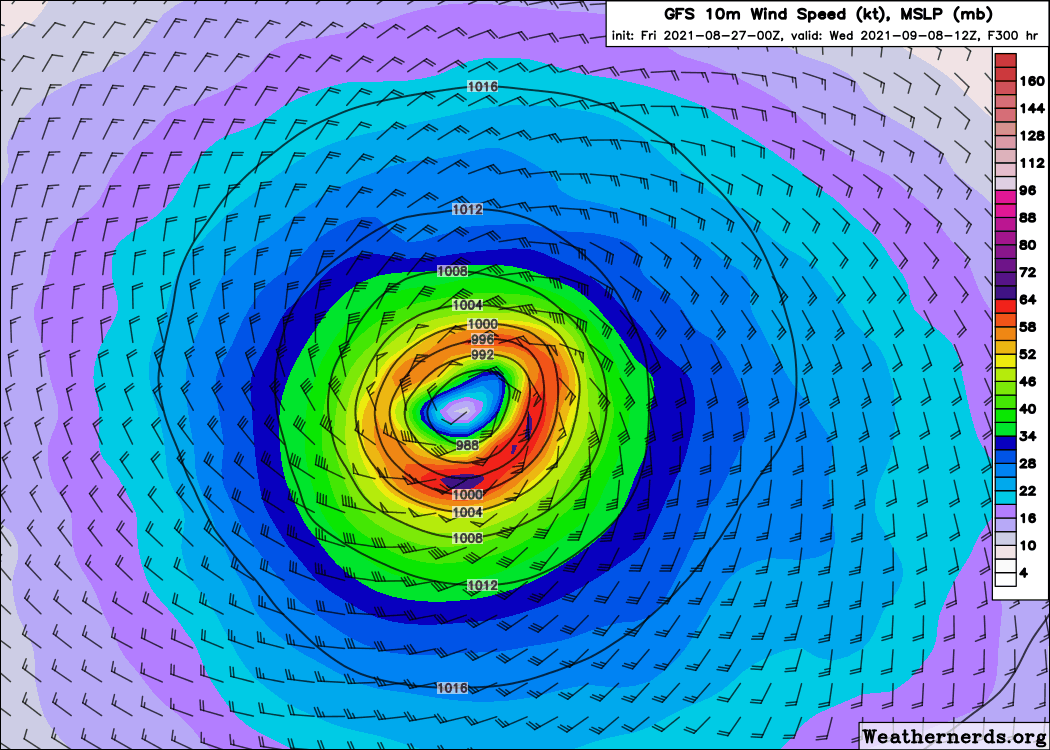 O NHC a limitar as probabilidades. 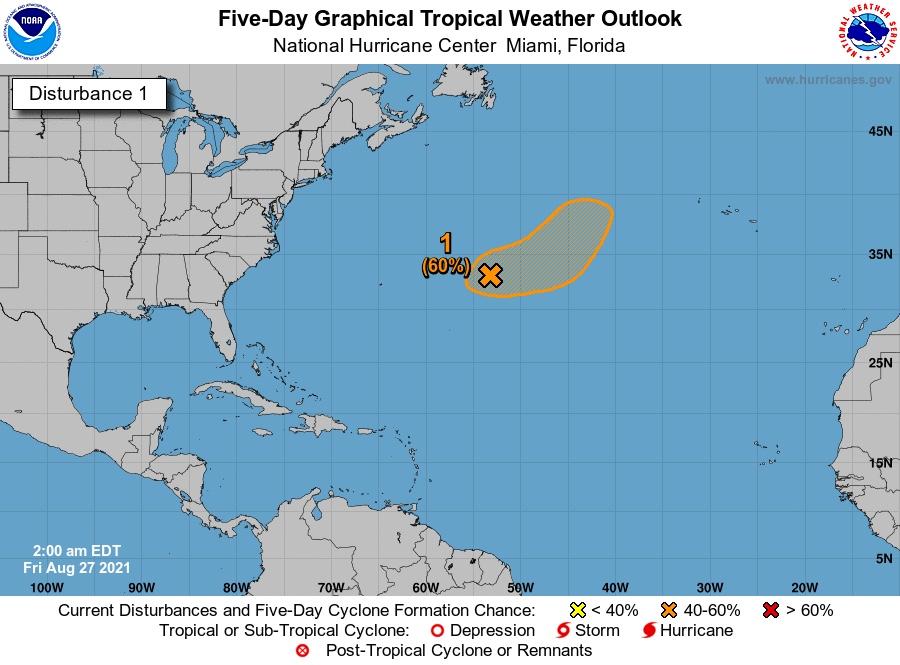 1. An elongated area of low pressure located over the central Atlantic
about 650 miles east of Bermuda is producing disorganized showers
and thunderstorms. Environmental conditions are only forecast to be
marginally conducive for development, but a tropical depression
could still form over the weekend. The system is expected to move
slowly eastward during the next day or two, but a faster
northeastward motion is forecast to begin on Sunday.
* Formation chance through 48 hours...medium...50 percent.
* Formation chance through 5 days...medium...60 percent.

...IDA CONTINUES TO STRENGTHEN...
...HURRICANE WARNING ISSUED FOR THE ISLE OF YOUTH AND WESTERN
CUBA...

The government of Cuba has replace the Tropical Storm Warning with
a Hurricane Warning for the Isle of Youth, and the Cuban provinces
of Pinar del Rio and Artemisa.

SUMMARY OF WATCHES AND WARNINGS IN EFFECT:

A Hurricane Warning is in effect for...
* Cuban provinces of Pinar del Rio and Artemisa, and the Isle of
Youth

A Hurricane Watch is in effect for...
* Cameron, Louisiana to the Mississippi/Alabama border
* Lake Pontchartrain, Lake Maurepas, and Metropolitan New Orleans

A Tropical Storm Warning is in effect for...
* Little Cayman and Cayman Brac
* Cuban provinces of Matanzas, Mayabeque, and Havana

A Tropical Storm Watch is in effect for...
* Mississippi/Alabama border to the Alabama/Florida border.

A Hurricane Warning means that hurricane conditions are expected
somewhere within the warning area, in this case within the next 12
hours.

A Tropical Storm Warning means that tropical storm conditions are
expected somewhere within the warning area.

A Storm Surge Watch means there is a possibility of life-
threatening inundation, from rising water moving inland from the
coastline, in the indicated locations during the next 48 hours.
For a depiction of areas at risk, please see the National Weather
Service Storm Surge Watch/Warning Graphic, available at
hurricanes.gov.

A Hurricane Watch means that hurricane conditions are possible
within the watch area. A watch is typically issued 48 hours
before the anticipated first occurrence of tropical-storm-force
winds, conditions that make outside preparations difficult or
dangerous.

A Tropical Storm Watch means that tropical storm conditions are
possible within the watch area, generally within 48 hours.


DISCUSSION AND OUTLOOK
----------------------
At 1100 AM EDT (1500 UTC), the center of Tropical Storm Ida was
located near latitude 20.7 North, longitude 82.1 West. Ida is moving
toward the northwest near 15 mph (24 km/h), and this general motion
should continue over the next few days. On the forecast track, the
center of Ida will pass near or over the Isle of Youth and western
Cuba later today, and move over the southeastern and central Gulf
of Mexico tonight and Saturday. Ida is forecast to make landfall
along the U.S. northern Gulf coast within the hurricane watch area
on Sunday.

Reports from Air Force and NOAA reconnaissance aircraft indicate
that the maximum sustained winds have increased to near 65 mph
(100 km/h) with higher gusts. Additional strengthening is forecast
today and Ida is expected to be a hurricane when it nears western
Cuba later today. Steady to rapid strengthening is expected when
Ida moves over the southeastern and central Gulf of Mexico over the
weekend, and Ida is expected to be a major hurricane when it
approaches the northern Gulf coast.


HAZARDS AFFECTING LAND
----------------------
Key messages for Ida can be found in the Tropical Cyclone
Discussion under AWIPS header MIATCDAT4, WMO header WTNT44 KNHC,
and on the web at hurricanes.gov/graphics_at4.shtml?key_messages.

STORM SURGE: A dangerous storm surge will raise water levels by
as much as 4 to 6 feet above normal tide levels in areas of onshore
winds along the immediate coast of the Isle of Youth and near and to
the east of where the center crosses the coast of western Cuba.
Near the coast, the surge will be accompanied by large and
destructive waves.

The combination of a dangerous storm surge and the tide will cause
normally dry areas near the coast to be flooded by rising waters
moving inland from the shoreline. The water could reach the
following heights above ground somewhere in the indicated areas if
the peak surge occurs at the time of high tide...

Overtopping of local levees outside of the Hurricane and Storm
Damage Risk Reduction System is possible where local inundation
values may be higher than those shown above.

The deepest water will occur along the immediate coast near and to
the east of the landfall location, where the surge will be
accompanied by large and dangerous waves. Surge-related flooding
depends on the relative timing of the surge and the tidal cycle,
and can vary greatly over short distances. For information
specific to your area, please see products issued by your local
National Weather Service forecast office.

RAINFALL: Ida is expected to produce total rainfall accumulations
of 6 to 10 inches with maximum totals of 15 inches across Jamaica.
Rainfall totals of 8 to 12 inches with isolated maximum amounts of
20 inches are expected across the Cayman Islands and western Cuba,
including the Isle of Youth. These rainfall amounts may produce
life-threatening flash floods and mudslides.

As Ida approaches the central Gulf Coast Sunday afternoon, total
rainfall accumulations of 8 to 16 inches with isolated maximum
amounts of 20 inches are possible from southeast Louisiana to
coastal Mississippi and Alabama through Monday morning. Ida is
forecast to turn northeast as it moves inland later Monday with
rainfall totals of 4 to 8 inches possible across southern and
central Mississippi. This is likely to result in considerable flash,
urban, small stream, and riverine flooding.

SURF: Swells generated by this system will affect the Cayman
Islands and Cuba through tonight. Swells will begin reaching
portions of the northern Gulf coast Saturday night or early Sunday.
These swells are likely to cause life-threatening surf and rip
current conditions. Please consult products from your local weather
office.