Update Thu, 30 Dec 2021, 07:31
Quake reported as magnitude 6.1 did not occur
The quake originally reported by the Italian Institute INGV was likely a result of wrong automatic calculations and subsequently deleted.

A magnitude 6.1 earthquake near Jasper, Dubois County, Indiana, USA, was reported only 29 minutes ago by Italy's National Institute of Geophysics and Volcanology (INGV), considered the main national agency that monitors seismic activity in this part of the world. The earthquake occurred at a great depth of 298 miles beneath the epicenter around noon on Wednesday, December 29th, 2021, at 12:43 pm local time. The exact magnitude, epicenter, and depth of the quake might be revised within the next few hours or minutes as seismologists review data and refine their calculations, or as other agencies issue their report.
Towns or cities near the epicenter where the quake might have been felt as very weak shaking include Tell City (pop. 7,300) located 19 miles from the epicenter, Jasper (pop. 15,500) 24 miles away, Valley Station (pop. 22,800) 38 miles away, Owensboro (pop. 59,000) 41 miles away, New Albany (pop. 36,700) 41 miles away, Louisville (pop. 243,600) 44 miles away, Jeffersonville (pop. 47,000) 46 miles away, and Evansville (pop. 119,900) 55 miles away. 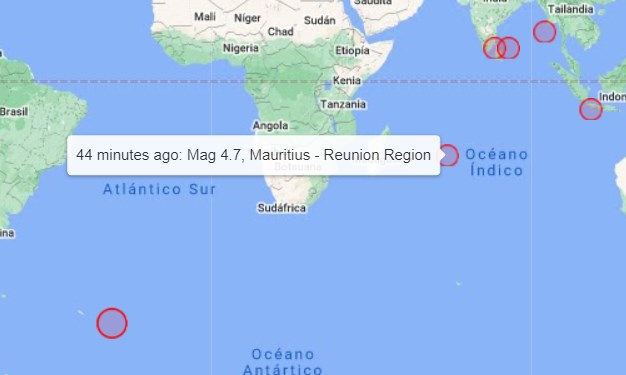