Storm set to last Channel coast
Harbour in storm BBC
The south coast of England is bracing itself for severe gales as a winter storm brings winds of 70mph. 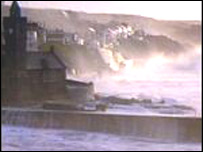 The storm is likely to disrupt ferry services across the channel, the BBC weather service said.

The gale will track from east to west and bring heavy rain across the coast and up the English Channel.

In the early hours of Sunday morning winds had reached 40 miles an hour in Dover, Southampton and Poole. The storm is not expected to cause major damage.
http://news.bbc.co.uk/2/hi/uk_news/7123479.stm
Clique para expandir... 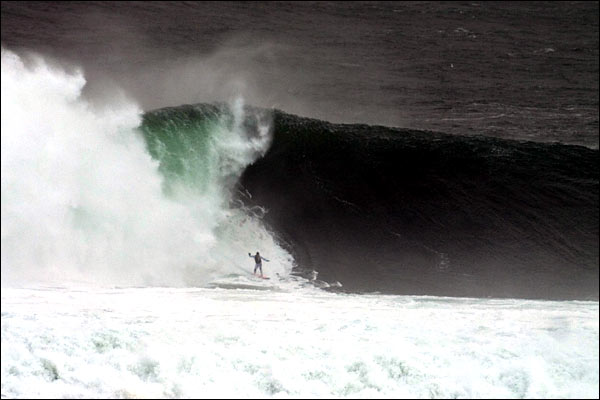 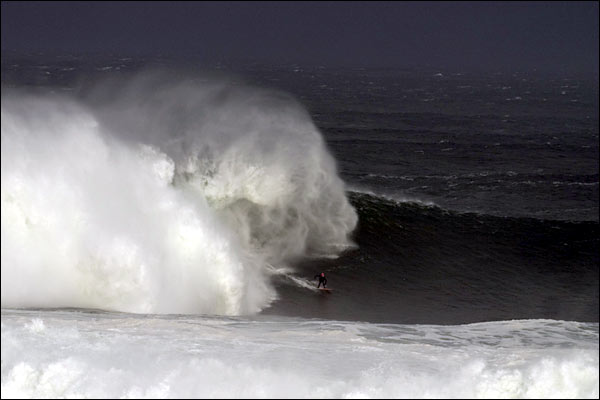 Duncan Scott, 29, from Newquay, was surfing at Mullagmore Head in Donegal Bay as waves estimated at 55ft (16.7m) high lashed the coast.

He said that he was safe because friends were on hand with a water bike.

He and three others, who have surfed some of the biggest breaks in the world, including Mavericks in California, used the water bike to tow them onto the waves.

Mr Scott said: "These were the biggest waves I have ever surfed, but I never felt in danger because we were using experienced riders who were on hand all the time.

"The jet skis have a platform at the rear so you can get back to safety."

It is understood that low pressure near Iceland is causing the high sea levels with waves growing for between 500 and 600 miles by the time they crash against the Irish coastline.

Dr Glenn Nolan, of the Marine Institute, said: "This is allowing waves to travel all the way uninterrupted to the Irish coast.

"It's quite unusual. The last time we would have had waves close to this height would have been in early 2005 and before that in 2000."

Dr Nolan warned that the entire west coast, from Cork up to Donegal, was affected.

Previously the biggest waves recorded by the Marine Institute's data buoys were to the west of Galway Bay in January 2005, when swells of 44ft (13.4m) were recorded.

Giant waves on Maui today damaged facilities at two north shore public beach parks and injured one tow-in surfer, county officials said in a news release. Baldwin Beach Park and Ho'okipa Beach Park were both closed at 2:30 p.m. and will remain closed until the areas are declared safe by ocean safety personnel. At Baldwin Beach Park, wave faces were reported to be 60 feet to 70 feet on the outside reef and a tow-in surfer sustained severe cuts and a possible compound fracture to his leg, officials said. Two lifeguard vehicles — a wave ski and an ATV — were picked up by the shorebreak and thrown against a picnic pavilion door at Baldwin Park. The door was broken, and sand washed into the open-air pavilion. The waves caused substantial damage to the shoreline with sand piling up in the men's restroom and debris littering the park, according to officials.

"It's rubber boots country in the back parking lot," said Leland Parker, maintenance supervisor for the Coastal Section, East Parks District. "The waves are washing into the parking area and the water just gets backed up, with nowhere to go." At Ho'okipa Beach Park, wave faces were at 30 feet to 50 feet, according to Archie Kalepa, ocean safety operations supervisor. Waves washed up the steep stone wall into the pavilions, carrying sand and debris. "When it's this big, it's actually a lot easier to convince people to stay out of the water," Kalepa said. "It's the people onshore who have to be extremely careful — no one should ever turn their back to the ocean, even when they think they're standing in a safe zone." Kalepa also reported that two surfers were rescued at Honolua Bay on Maui's northwest side. Surf was estimated to be breaking in the 30-foot range.)

WAILUKU, Maui — "It was the worst lickings I've ever had," said extreme waterman Brett Lickle, describing his wipeout Monday in a wave with an estimated 80-foot face.
Lickle, 47, suffered a severe gash on his left leg during an afternoon session at Outer Sprecks with famed big-wave surfer Laird Hamilton, who stripped naked to fashion his surf trunks into a tourniquet to prevent his tow-in partner from bleeding to death.
"It was the most intense thing I've been through," said Lickle, recuperating yesterday at his Ha'iku home.
Lickle and other big-wave experts said Monday's storm surf created historic swells that rolled in close together, making it more dangerous for personal watercraft operators to swoop in and pick up their surfing partners before the next breaking wave.

"Those were the biggest waves that any of us have seen," said Buzzy Kerbox, another member of Maui's big-wave surfing community.

The oceanic "sloshing" is steadily taking land from such western Pacific island nations as Tuvalu, Kiribati and the Marshall Islands. In Papua New Guinea, reports have trickled in this year of fast-encroaching tides on shorelines of the northern island province of Manus, the mainland peninsular village of Malasiga and the Duke of York Islands off New Britain.
International media attention paid to the Carteret Islands, the best-known case, seems to have drawn out others, said Papua New Guinea's senior climatologist, Kasis Inape.
"Most of the low-lying islands and atolls are in the same situation," Inape said in Port Moresby.

Here in Kilu on the Bismarck Sea, on a brilliant blue bay ringed by smoldering volcanoes, swaying coconut palms and thin-walled homes on stilts, the invading waves last year forced some villagers to move their houses inland 20 or more yards -- taking along their pigs, chickens and fears of worse to come.
It did, on November 25, when the highest waters yet sent them scurrying.
"We think the sea is rising," said 20-year-old villager Joe Balele. "We don't know why."
The scene is repeated on shores across the Pacific, most tragically on tiny island territories with no "inland" to turn to.

Legendary Monterey Bay surfer Peter Davi, 45, drowned at Ghost Tree on Tuesday afternoon, according to the Monterey County Coroner's Office. According to Ghost Tree local Don Curry, the day started out incredibly. Thirty foot sets that stretched out to 70'+ wave faces rolled into the scenic Ghost Tree. It was the biggest Ghost Tree had ever been ridden.In the mid-morning, Davi, who was paddling into the waves, broke his leash and began swimming in. One tow team offered Davi a ride in but the surfer refused. Another tow team offered Davi a PFD but again Davi refused according to Curry.