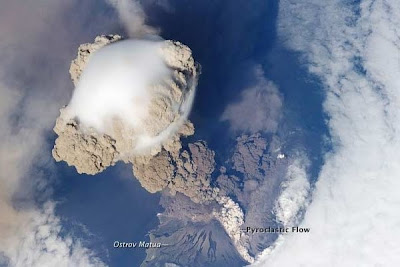 VOLCANIC SUNSETS: The plume of volcanic dust and sulfur dioxide that has caused so many pretty sunsets over the USA this week has crossed the Atlantic and reached Europe. "It was difficult to stay concentrated on the Moon with such a dramatic sunset!" reports Benjamin Poupard, who took this picture last night from Reims, France

Similar reports are pouring in from Spain, England, the Netherlands and many US states. Here's what to look for: When the sun goes down, delicate ripples of white appear over the western horizon. Then, as the twilight deepens, the sky turns a lovely shade of "volcanic lavender."

The source of the phenomenon is Russia's Sarychev Peak volcano. It erupted on June 12th, hurling massive plumes of sulfur dioxide (SO2) and other debris into the stratosphere. The white ripples that herald these sunsets are made of volcanic aerosols--a mixture of ash and sulfur compounds. Blue light scattered by fine volcanic aerosols combines with ordinary red sunset rays to produce the telltale lavender.

Earth-orbiting satellites are monitoring Sarychev's sulfur dioxide plume as it circumnavigates the globe at high latitudes, spreading the phenomenon from Russia to the USA to Europe and back again. All northern sky watchers should be alert for volcanic sunsets.

On June 12, 2009, Russia's Sarychev Peak volcano erupted, hurling an enormous plume of ash and sulfur dioxide into the stratosphere. This has produced some unusually beautiful sunrises and sunsets around the northern hemisphere. When the sun goes down, delicate ripples of white appear over the western horizon. Then, as twilight deepens, the sky turns a lovely shade of "volcanic lavender." Fine volcanic aerosols in the stratosphere scatter blue light which, when mixed with ordinary sunset red, produce the lavender hue. Other signs to look for include a bright yellow "twilight arch" and long crepuscular rays and shadows.

Reports have been increasing during the past week of unusual and picturesque sunsets around the globe.

These are the direct result of a huge plume of volcanic gases ejected skyward by the Russian volcano Sarychev on June 12, 2009. The eruption column of ash and gases rose to over 65,000 feet and spread out for thousands of miles in the days following the event.

The sulfur dioxide in the cloud combines with water vapor in the stratosphere to create a haze. Although you can’t see it during the day, the refraction caused by the thin cloud has been reported to create colors from spectacular reds, to deep blues and purples.

This was a fairly large eruption and the effects on sunsets may last for many months. It should be good for a nice sunrise if you’re an early riser. Since the sun hits the horizon about 6:20 in early July, you’ll need to get outside to watch by 5:40a.m., as the best colors will be well ahead of actual sunrise.

The evening might be a little more fun to try. So hope for a clear evening and keep an eye to the west!