A storm system may soon take on tropical characteristics in the middle of the Atlantic and sweep through the Azores and United Kingdom next week.

The AccuWeather.com Hurricane Center is monitoring the development of a system located well northeast of the Leeward Islands in the Atlantic Ocean.

According to Tropical Weather and Hurricane Expert Dan Kottlowski, "With time, over the next several days, the feature could take on tropical characteristics."

The disturbance is not forecast to come close to the Leewards, Bermuda or North America, but steering currents could guide the system near to the Azores during the middle of next week, and then perhaps on to the United Kingdom late next week or during the last weekend of November.

A blocking zone of high pressure will keep the system from moving much farther to the west.

It is unclear as to whether or not the system will become purely tropical, but additional organization and strengthening are likely through the weekend into early next week.


The next name on the list of tropical cyclones in the Atlantic Basin for 2011 is "Tammy."

"Surface water is warm enough over the region and wind shear will drop off for a time," Kottlowski added.

Indications are that the center will pass over or just west of the Azores long about Wednesday. The islands could be facing rough seas, gusty winds and squalls around that time.

The feature may then be absorbed by a front approaching from the west. The front could bring a gale center northward, perhaps affecting the U.K. down the road.

Rough seas will be a concern for shipping over the middle of the Atlantic.

FOR THE NORTH ATLANTIC...CARIBBEAN SEA AND THE GULF OF MEXICO...

1. THERE HAS BEEN LITTLE CHANGE IN THE ORGANIZATION OF SHOWER AND
THUNDERSTORM ACTIVITY ASSOCIATED WITH A LOW PRESSURE SYSTEM LOCATED ABOUT 600 MILES NORTHEAST OF THE NORTHEASTERN LEEWARD ISLANDS
DURING THE PAST SEVERAL HOURS. ENVIRONMENTAL CONDITIONS APPEAR
MARGINALLY CONDUCIVE FOR THE DEVELOPMENT OF THIS DISTURBANCE DURING THE NEXT DAY OR SO AS IT MOVES SLOWLY NORTHWARD. THIS SYSTEM HAS A MEDIUM CHANCE...50 PERCENT...OF BECOMING A SUBTROPICAL OR TROPICAL CYCLONE DURING THE NEXT 48 HOURS.

ELSEWHERE...TROPICAL CYCLONE FORMATION IS NOT EXPECTED DURING THE
NEXT 48 HOURS.

A broad area of low pressure located approximately 850 miles to the northeast of the Leeward Islands continues to produce a large swath of cloudiness. Underneath some of these clouds are showers and thunderstorms; mainly to the north and east of the storm's center.

Over the past 24 hours the storm has become better organized as it continued to sit and spin slowly over warm waters in the central Atlantic. The storm is forecast to continue to organize and develop over the next couple of days. It is possible that it may develop into a subtropical storm by the middle of the week. Kottlowski added "It's possible that this system could affect the Azores on Friday of this week."

Heavy rain and gusty winds could be expected across the islands and continue through the upcoming weekend.
Clique para expandir... 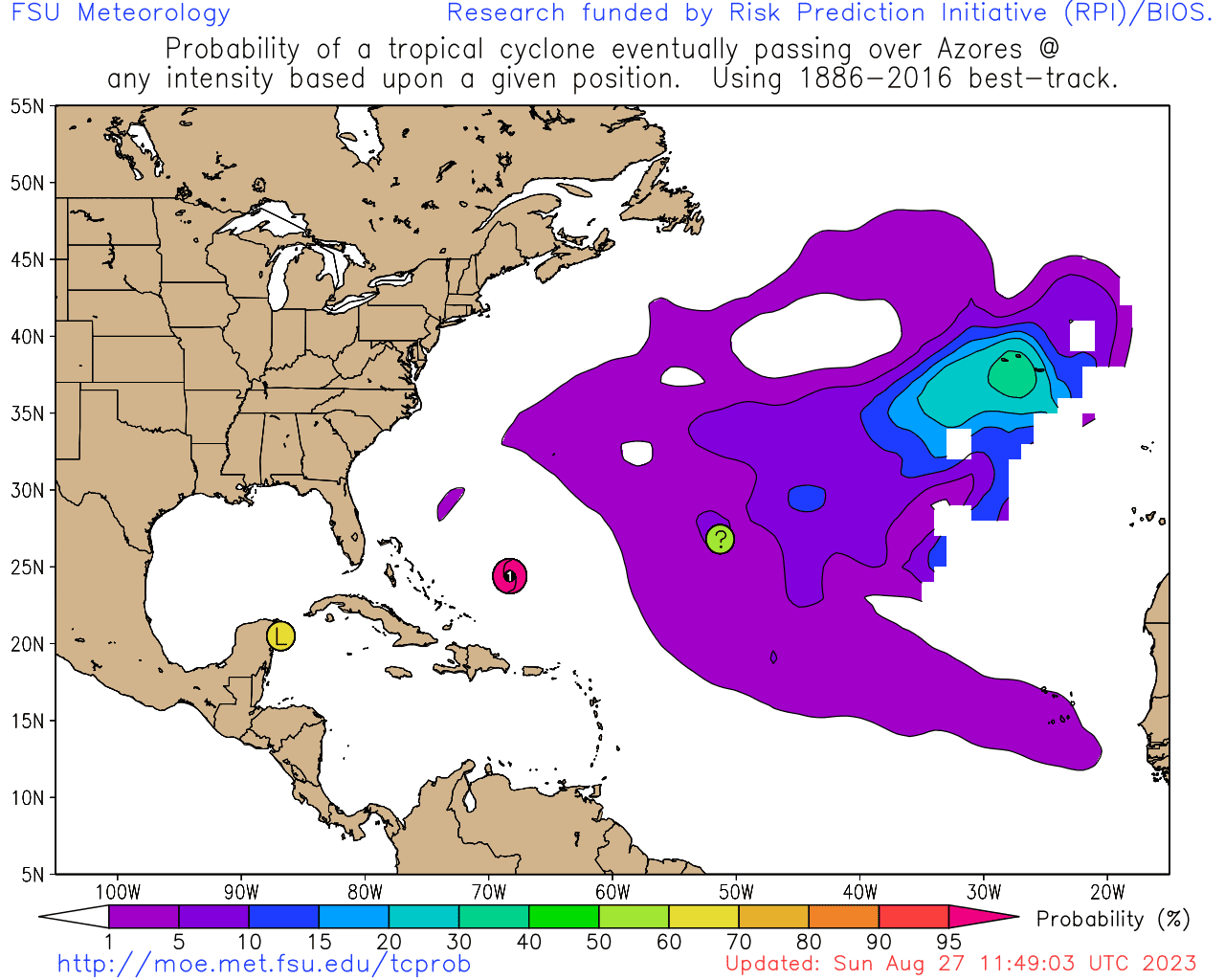 FOR THE NORTH ATLANTIC...CARIBBEAN SEA AND THE GULF OF MEXICO...

SURFACE OBSERVATIONS NEAR THE LOW PRESSURE AREA LOCATED ABOUT
1000 MILES EAST-SOUTHEAST OF BERMUDA INDICATES THAT THIS SYSTEM
CONTINUES TO OBTAIN FRONTAL CHARACTERISTICS. THE LOW IS LIKELY TO
STRENGTHEN AS AN EXTRATROPICAL CYCLONE AND CONTINUE PRODUCING GALE
FORCE WINDS AS IT MOVES NORTHEASTWARD DURING THE NEXT COUPLE OF
DAYS. THIS SYSTEM HAS A LOW CHANCE...10 PERCENT...OF BECOMING A
SUBTROPICAL CYCLONE DURING THE NEXT 48 HOURS. ADDITIONAL
INFORMATION ON THIS LOW CAN BE FOUND IN HIGH SEAS FORECASTS ISSUED
BY THE NATIONAL WEATHER SERVICE...UNDER AWIPS HEADER NFDHSFAT1 AND
WMO HEADER FZNT01 KWBC.

ELSEWHERE...TROPICAL CYCLONE FORMATION IS NOT EXPECTED DURING THE
NEXT 48 HOURS.