Tuesday’s storm in the valley is going into the record books as producing some of the largest hail ever recorded in the state of Arizona.

According to National Weather Service records, the tennis ball-size hail -- 2.5 inches in diameter -- that fell Tuesday in Scottsdale is tied for the 10th largest hail ever reported in Arizona.

It’s also the second largest hail ever reported in Maricopa County, topped only by a hailstone measuring 2.75 inches in diameter that fell on North Cave Creek in 1990.

This is also only the second time that tennis-ball or larger hail has been reported in Maricopa County.

The storm that swept across the center of the United States on October 26 and October 27, 2010, was memorable to those who experienced it because of its strong winds, rain, hail, and widespread tornadoes. Meteorologists get excited about the storm because it set a record for the lowest pressure (not associated with a hurricane) measured over land in the continental United States. At 5:13 p.m. CDT, the weather station in Bigfork, Minnesota recorded 955.2 millibars (28.21 inches of pressure). Pressure is one indicator of a storm’s strength, and this measurement corresponds to the pressure seen in a Category 3 hurricane.

This image, taken by the GOES satellite on October 26, shows the storm system circling around the area of extreme low pressure. Such extratropical cyclones form over the United States in the spring and fall, when the temperature difference from north to south is large. Cool, high-pressure air rushes toward the warmer, low-pressure air. Because the Earth is rotating, the air moving in ends up circling the area of low pressure, creating the cyclone shown in the image. The intensity of the storm is determined by the pressure difference between the center and the outer edges. Extreme low pressure in the center of the storm, therefore, is an indicator that the storm was very intense.

The animation shows the storm developing starting late on October 25 and running through October 27. The cyclone formed very quickly on October 26, taking a distinctive comma shape as the day went on. The storm developed so quickly, in fact, that it is classified as a bomb, an extremely fast developing storm (dropping at least one millibar of pressure per hour for 24 hours), more common over water than land.

The storm was also huge. Though the area of low pressure is centered over the Upper Midwest, the storm reached from the Gulf of Mexico into Canada, and from the Rocky Mountains to the Atlantic Ocean.

Extratropical cyclones bring an array of unsettled weather, including strong wind, rain, hail, and tornadoes, and this cyclone brought all of that. On October 26–27, winds gusted up to 78 miles per hour in Michigan, with high winds throughout the Midwest. The National Weather Service reported 61 tornadoes over the two days. Heavy snow also fell in the north.
Clique para expandir...

Weekend Blizzard Goes Down in the Record Books By Heather Buchman, Meteorologist
Dec 14, 2010; 7:15 AM ETShare | .

To see footage of the blizzard and the collapse of the Metrodome, click on this video.

The blizzard that pummeled the Upper Midwest over the weekend was one for the record books, burying some communities with nearly 2 feet of snow and breaking 100-year-old records in others.

Even all the way into the South, new records have been set as snow and brutally cold air blasted in behind the storm.

Minnesota and Wisconsin were hardest-hit by the blizzard, with more than 20 inches of snow piling up east of the Twin Cities and into western parts of Wisconsin Friday night into Saturday night. 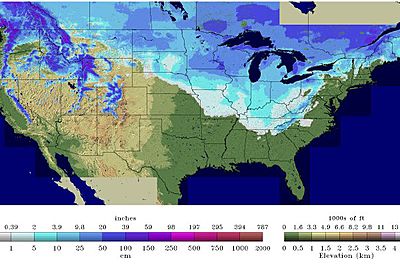 This image shows snow depth across the country as of Monday, Dec. 13, 2010. The snowstorm over the weekend significantly increased the percentage of snow cover for the contiguous U.S., as it dropped measurable snow in the central Plains and the mid-Mississippi and Tennessee valleys.

The 17.1 inches that fell in Minneapolis from Dec. 10-11 set the all-time record for two-day snowfall in December. The snow was enough to cause a tear in the roof of the Metrodome and deflate it, forcing the Vikings-Giants game originally scheduled for Sunday afternoon to be moved to Ford Field in Detroit Monday evening.

The Giants also had to be re-routed from Minneapolis to Kansas City Saturday, as the blizzard shut down the Minneapolis International Airport.

A large section of I-90 across southern Minnesota and I-29 between Sioux City, Iowa, and Omaha, Neb., were closed, among many other roads and highways, over the weekend. 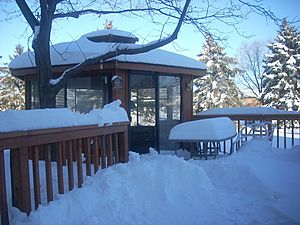 This photo was sent in by Barb Janas from Anoka, Minn., a northern suburb of Minneapolis, Sunday after the blizzard. Visit our AccuWeather.com Facebook page to share pictures of wintry scenes in your area.
While Minnesota and Wisconsin bore the brunt of the blizzard, daily snowfall records were set all across the Midwest. Other major cities where records were set include Detroit with 6.3 inches, Indianapolis with 4.1 inches and St. Louis with 4.4 inches.

Other record daily snowfall totals in the Midwest include:

Though the storm raced northeastward out of the U.S. and into southeastern Canada late in the weekend, cold air blasting in behind it allowed snow to fall all the way into the South Sunday. Snowflakes even flew in Atlanta Sunday and again Monday morning.

A trace of snow set records in Anniston and Tuscaloosa, Ala., Jackson, Tenn., and Jonesboro, Ark.

In the mountains of North Carolina, snow amounts ranged from a couple of inches to almost a foot and a half. The 2.8 inches that fell in Asheville, N.C., broke a longstanding record from 1917.

The coldest air of the season yet, and perhaps the coldest of the entire winter for some places, is now gripping the eastern half of the country. Temperature records have already started falling, especially in the South, and many more are expected to be broken through Wednesday.
Clique para expandir...